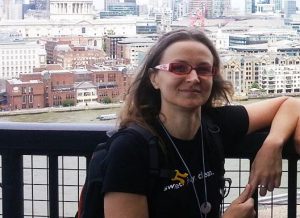 Nothing pleases us more at Richdales than catching up with past students to see how their lives have changed for the better since taking our courses. This month, we had the pleasure of talking to Dara Krastich, who joined Richdales back in 2015.

Like many of our students, Dara had a successful career before embarking on a new venture in massage therapy. In fact, Dara worked as a high-flying events manager for IBM before deciding to study reflexology. Managing many famous faces and being responsible for large teams of people, Dara enjoyed the success she earned but found the job extremely stressful. She craved for a better work/life balance; a career that still offered great job satisfaction but without excessive stress.  And so her journey into reflexology and massage therapy began.

From as way back as she can remember, Dara had shown an interest in trying to help people feel better and had always had the intention in learning about reflexology. While working as an events manager, Dara would occasionally massage the hands and feet of her friends and family and she always received positive feedback. Dara told us how the people she massaged would tell her they had slept better or experienced a reduction in their pain levels after being massaged by her. But it was actually her mother (who she massaged often) who gave Dara the life-changing nudge to turn her hobby into a career.

With a pocket full of positive feedback and her mother’s encouragement, Dara began to research online for the best reflexology courses available. Like all of our students, she stumbled across a few reputable course providers, but it was the feedback on the Richdales site, along with the expertise of our tutors, that prompted Dara into studying through us.

Now, nearly three years on, Dara has successfully completed courses in not only reflexology, but massage, sports massage and pregnancy massage. Amazingly, she even managed to complete her studies around the same time as suffering a serious accident! Dara now enjoys a full time career as a therapist where her long list of loyal clients continues to grow.

So what advice would Dara give to someone looking to study similar courses?

Her first tip is simple: to listen to your inner voice and to follow your instincts. If something is telling you to change your career, don’t ignore it.

Secondly, Dara would recommend attending a taster day at Richdales to see first-hand what you can expect when you join the Institute.

And Dara’s final piece of advice, in her own words, is to “take it easy”. Dara believes that gaining your qualifications is only the first step on the road to success and that everyone should take the time to develop and enhance their skills. And we couldn’t agree more!

Dara took the first step in changing her life and career by joining Richdales. Now, just a few years after feeling swamped in a stressful job, Dara is reaping the rewards of making the decision to study with us!

We would like to thank Dara for sharing her story with us and wish her all the very best for the future.