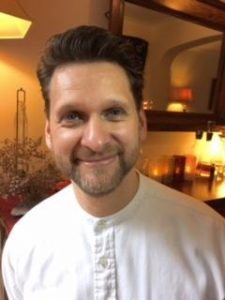 Nothing gives us greater satisfaction than hearing from our former students who have gone on to build successful careers. We recently caught up with Jonathan Hitchcock, who joined Richdales to study massage therapy after spending 20-years in the retail sector. Since qualifying, Jonathan has set about building his massage practice and now treats a regular stream of clients, including a professional West End dancer!

For Jonathan, life as a massage therapist couldn’t be more different than the rat-race of working in a 9-5 job. But what made someone with a cemented career in the retail sector choose to study a massage course?

“I always wanted to do massage in my early twenties,” Jonathan told us, “but life got in the way and took me in a different direction. Initially, I wanted to learn a new skill-set and have another string to my bow; something to rely and fall back on. Then after I qualified I wanted to use my new found qualification to help people.”

Like many of our students, Jonathan hadn’t embarked on any form of studying for a long time before joining Richdales (25-years in fact). With no prior experience of massage training and firmly out of practice studying in a classroom environment, Jonathan describes taking the leap back to being a student as “scary and exhilarating at the same time.”!

“[Massage training] is a whole different language than what you’re used to”, Jonathan told us when looking back to when he began his course. And he is living proof that any amount of success is possible through hard work, enthusiasm and determination! Still holding down a full-time job at the time he started his course; time-poor Jonathan took a holiday from work and devoted an entire week to studying his massage material. Now that’s dedication! And it certainly paid off when Jonathan passed his examinations with flying colours!

Jonathan is the first to admit that he was initially more than a little nervous about studying a brand new subject, but Richdales gave him confidence from the outset.

“Richdales’ website was well thought out, easy to read and gave the information that I wanted,” Jonathan told us, “If someone’s put that much work into their website then they’re serious about the courses they run.”

These days, Jonathan is a world away from the man who felt anxious about starting a new course. In fact; life has improved so much since qualifying as a massage therapist that Jonathan is now studying sports massage at Richdales too!  Keen to expand on his existing skills, Jonathan hopes that a qualification in sports massage will enable his massage treatment be even more effective.

Speaking about his approach to treatment, Jonathan told us; “I look at diet and lifestyle: the holistic view – and look at [clients] as a whole person. When I first set up [in the, massage industry] I thought I would get clients with serious issues, but many just had general aches and pains.”

Interestingly, Jonathan told us about a runner client of his who had extremely poor flexibility – so much so that he couldn’t raise his knees to his chest. Jonathan’s ability to identify and evaluate his problems has led to the client receiving correctional physiotherapy treatment.

Jonathan’s exceptional massage skills started to become recognised right at the very start of his massage career.  Soon after qualifying, Jonathan discovered he had a very strong massage technique.

“I went to massage at a festival,” Jonathan recalled, “and I was known as the ‘one to go to’ for the deep tissue massage because I naturally have that strength in the upper body to cope with deep tissue.”

Since then, Jonathan’s reputation as a massage therapist has soared and his business has gone from strength to strength. His unique ability to adapt his approach to suit each client has resulted in exceptional feedback and an ever-rolling list of client referrals and recommendations. When we asked Jonathan what he thought was the key to his success, he simply told us; ““I think outside the box and make my massage personal to me.”

So what advice would Jonathan give to those starting a massage course?

“I would say ‘enjoy the course!’”, he told us. “Dive right in with your arm bands on into the deep end and swim and enjoy!”

“Study, study, study! You can’t get enough study! Having gone through the course, [you must] study, a lot! You may have looked at that same page fifty times before, but still study it! You’re always learning something new. “

We would like to thank Jonathan for taking the time out of his now very busy schedule to chat with us. Jonathan’s inspirational story goes to show that no matter where your career has taken you so far, and no matter how long it’s been since you studied, it is possible to achieve anything you want.

We wish Jonathan all the very best in his sports massage course and have no doubt that the qualification will boost his already flourishing career.

You can read more about Jonathan and find out about his treatment services at Londonhomemassage.uk

Thinking of following in Jonathan’s footsteps? Enrol now for one of our ITEC courses in London and you could be our next big success story!