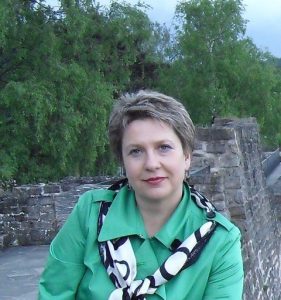 Liana Girdeniene had been receiving Reflexology treatments for 5 years but she never believed she would be able to learn to be a reflexologist herself. However, a visit to a reflexologist, who was a past student of Richdales, inspired her to come to Richdales and learn.

She’s never looked back and has been growing her business by learning new skills since.

For most of her life Liana had been interested in healing, healthy eating and exercise. She had spent time educating herself about health by reading lots of articles and books on the subject, however, she thought it would be too hard for her to train to enter into the field of complementary therapy, mainly, due to the fact that English is not her first language.

It was only a visit to receive treatment at a reflexologist in Camden that finally gave her the kick to follow her passion and pursue training at Richdales. The reflexologist she visited had been impressed with her knowledge when they spoke and when Liana told him that she wished she could do what he was dong he said “Why don’t you do it!”. He reassured her she could definitely do it and she would be fine. He reinforced that she just needed to believe in herself.

The reflexologist was a past student at Richdales and so inspired by his words, Liana, researched Richdales and decided to take the ITEC Diploma in Reflexology course.

That was in 2014. Two year later she decided to study for the ITEC Diploma in Holistic Massage as she believed that she would be able to attract more clients by offering Reflexology and Massage. This has proven to be successful for Liana.

Liana says “Fewer people know about and try reflexology. When clients come to me for a massage I always tell them that I do reflexology and ask them if they would like to try it for 15 minutes at the end of the massage. I explain that they will get more relaxation and a deeper treatment and almost everyone wants to try it!”

Liana has found that by adding 15 minutes of reflexology to the massage the clients are happier and the usual response is “Wow – that felt amazing. I definitely want to come back.”

Liana has also gone on to study Aromatherapy to add to the treatments she can offer her clients. With the encouragement of her daughter, she has moved into developing products such as masks, facial creams, body lotions, shampoos soaps, bath salts and bath oils. She also has products that are specific for different skin types which people can check for their needs. In addition she develops custom products for clients to address their specific needs.

She offers this advice to anyone who is considering a career in complementary therapy “Don’t be scared – go for it. Believe in yourself and enjoy. It’s not easy but it is worth it.”

Finally Liana wants to thank all the tutors on the courses she has attended at Richdales – she liked them all.

You can find out more about Liana on her website here.