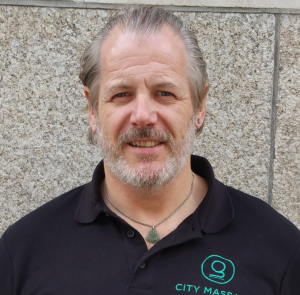 Once again we’ve been catching up with our past students and this month’s success story comes from John Kim-Yorke, an ex retail manager who now runs a successful massage therapy franchise.

John started training with Richdales back in 2010 after he stumbled upon a natural skill for giving massage treatment. “I gave a friend a massage and found I was naturally good at it!” John told us.

Going from a retail manager to a massage therapist is quite the career change, and it was actually a comment from a customer that prompted John into the idea of massage. John told us, “I was a stressed retail manager and a customer pointed out that if I continued like that, I would be headed for high blood pressure or a heart attack! So I started having massage treatment as a way of calming down.”

After personally experiencing the wonderful benefits of massage therapy, John decided he wanted to be able to help others in the same way, so he began looking into professional training. With so many course providers to choose from, and very little experience under his belt, John researched a lot of training providers before making a commitment. But of course, Richdales came out on top, with our affordable prices and positive reviews being the deciding factors for John!

Like many of our students, John remained working in his full time career whilst training for his massage qualifications. And even though he had to work 7 days a week and many evenings, the end goal was worth it. John even continued to learn after qualifying through Richdales by studying Thai body massage and Thai foot massage in Thailand! Now, seven years later, John runs a successful franchise business in London. The company has grown incorporating professional and corporate massage and John has a solid team who use the franchise brand to drive their own careers forward.  John now has a regular line up of clients as well as transient clients in London. And even though he started his business during the recession, he was never short of customers.

John told us, “What I learnt with massage is that it’s a necessity as much as it is luxury for many people.  Once people realise what massage does for them, it becomes part of their routine and they book in on a regular basis. People look forward to their massage the week before their appointment and find that they can often work harder in the lead up to their treatment, because that stress is going to be eliminated during the massage.”

John actually uses the analogy of maintaining a car to describe the effects massage can have on the body:  If you don’t service it, it’s going to break down. We couldn’t have put it better ourselves!

So how has life improved for John after qualifying as a massage therapist?

Since his dramatic career shift, John now has a lot more time and freedom and he’s in a better financial position! He can even take holidays – something he was never able to do when he worked as a retail manager.

“If you’re in management, you’re always under pressure to fit it in,” John said, “In retail, I would be lucky if I took a holiday every three years. Now, sometimes I even combine training with my holidays, just like I did in Thailand. The job satisfaction is worth its weight in gold!”

And what tips and advice would John give to someone looking to change their career and take a professional massage course?

John then said that planning is also essential; and that every student needs to work out how they will fit their studies and business building into their existing routines. After gaining his massage qualifications, John found that stepping down from retail manager into a part time sales position helped him to focus more time and energy into building his massage company. And it was only three months later that he left his job to work full time on his massage business. Looking back at that time, John told us, “I realised I was at that point where I either dipped my toe in the water or just plunge in. It worked for me!”

Like many new business owners, John relied heavily on referrals and word of mouth marketing to obtain new clients in the beginning. A good reputation is one of the most powerful marketing tools available and word has certainly got around about John’s company!

With his massage career growing by the day, everything has worked out for John. And he is certain that with enough hard work, enthusiasm and commitment, anyone looking to start a career as a massage therapist can enjoy the same level of success.

We would like to thank John for choosing to study at Richdales and for sharing his incredible story with us. All of the staff here wish him and his team the very best for the future and we have no doubt that John’s business will continue to thrive!

You can read more about John on his business website www.citymassagelondon.co.uk

Could you be our next big success story? The most rewarding journeys start with a single step, so get in touch with us now for more information.